A wooden bridge between the villages of Flims and Laax in the canton of Graubünden attracts everyone's attention, offering safety for slow traffic as well. The wood comes from the municipal forest – resorting to local materials and services was important to the makers.

The Flims Laax Falera region is visited by many tourists seeking relaxation in summer and winter. Before the bridge was built, they had to cross a busy cantonal road after parking at the Staderas car park. A safe crossing for pedestrians and cyclists was thus created with the construction of the bridge. At the same time, a new architectural landmark leads from the dense Flimser forest, with its up to 400 metres deep Rhine Gorge, into the Graubünden mountains, which open up on the other side of the road.

The engineering firm Walter Bieler AG has set itself the task of not only creating transition from point A to B, but to create a bridge with high architectural and constructional standards as well as regional sustainability. This balancing act was achieved wonderfully: The wooden overpass winds elegantly out of the forest to traverse the road like a viaduct. The bridge has a total length of 126 metres, consists of nine fields of different lengths and rises five metres at its highest point. With an inclination of only 6 %, it is also accessible for disabled people. The bearing structure rests on V-shaped supports – these are constructed as a truss, which means that the spans between the supports are reduced, thereby saving material and costs. In order to protect the structure from moisture, the 2.5 metre wide roadway was provided with poured asphalt serving as weather protection.

In order to meet the sustainability requirements of engineer Walter Bieler, he accompanied the forester on his walks through the Laax forest and selected trees suitable for the building material. He would have preferred to only use larch trees, but these are rare in the community; Bieler, therefore, chose spruce trees for weather-protected places.

Services should be assigned to regional firms – the local carpentry firm Camathias turned out to be the perfect partner for the realisation. Camathias was able to use the CAD drawings of the engineering firm as the basis for the machine data for manufacturing the wooden elements and import the drawings into the SEMA program. Given the mass of wooden elements and the size of the bridge components, the carpenters faced certain challenges to master: The space in their own production hall for the joining and assembling of the bridge elements was not big enough and so the longest bridge element had to be assembled outside. The road radius around their own workshop would have been too narrow for the transport. The carpenters worked only on this project for two months. The fact that no post resembles the other due to the curved design of the railing did not make things easier – and yet all staff members invested a lot of lifeblood and passion. After all, the conspicuous building was to be erected in front of one's own front door, and so everyone wanted to lend a hand themselves.

Finally, six carpenters set up the elements on site in the town of Staderas and connected the finished bridge elements onto the stud frame. They screwed the wooden elements together using about 2,000 80-centimetre screws. They had measured the exact distance between the supports by means of a laser in order to hit the foundations exactly. After 114 metres in length had been built, the last element to be constructed deviated less than two centimetres. "We ourselves were surprised about how precisely we succeeded in realising the bridge", recalls Martin Camathias, managing director of the carpentry firm.

It took four and a half months from the start of the concrete work for the support foundations to the inauguration of the bridge. Wood consumption was 82 m³ of construction wood. The wooden bridge has been very well received by the local population as well as the numerous hikers and bikers. Meanwhile, the bridge has become a gateway to this popular region. 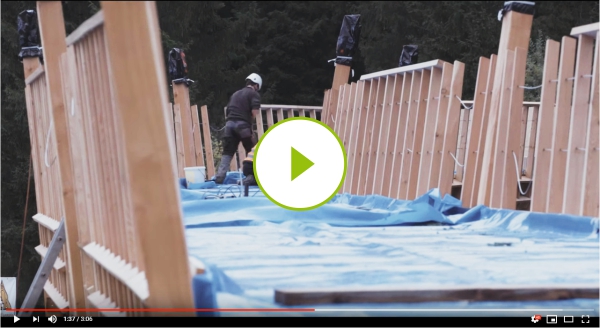